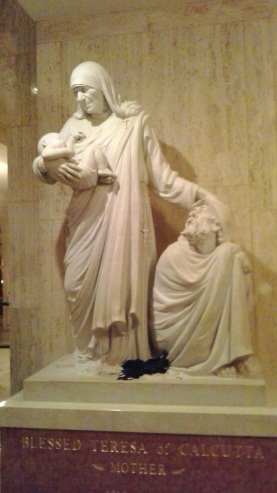 I saw the statue of Mother Teresa during a visit to the National Shrine of the Immaculate Conception in Washington, D.C. earlier this year. A pleasing and apt tribute, but a little unsatisfying, and it took me a minute to figure out why: the image is fixed and still, while its subject was always moving. Not mere motion, either, but positive and focused action.

I’m glad Mother Teresa is being canonized this weekend. I’ve thought of her for along time as a saint. With or without miracles, she embodied heroic virtue and service. How much of that will be understood by the people who weren’t around or weren’t paying attention when she was working in India?

She deserves more than to be reduced to a dry paragraph in a book of saints.

We can read about her. Start with Muggeridge’s Something Beautiful for God (a project that changed Muggeridge’s life). We can watch the movies  made about her life; I enjoyed The Letters. Eventually, though, I must move from hearing about her to hearing her.

Would you throw away an established career in midlife, to your own bewilderment and that of your superiors? She did, going from being a teacher as a Sister of Loreto to becoming a minister to the poor and foundress of an new religious order. “I was to leave the convent and help the poor while living among them. It was an order. To fail would have been to break the faith.” She called it her “call within a call.”

That woman had some nerve. Her address at the 1994 National Prayer Breakfast was but one illustration of her ability to unsettle world leaders. She talked about caring for the dying, about abortion, about natural family planning, about the urgency of first caring for one’s own family. Poor President and Mrs. Clinton found themselves seated while everyone else in the room was giving Mother Teresa a standing ovation.

I honestly don’t think she got up every morning thinking of how many people she could annoy. She simply went about her work and then told people about what she saw and did and believed. She served God with her words as much as with her deeds.

There was a bit of a fuss after her death when letters between her and her spiritual advisor became public. I remember some of the news coverage: Mother Teresa had doubts; she felt separated from God at times – as if those revelations somehow undermined her work and her reputation.That’s not how I took them, then or now.

She was really human. That was comforting in a way, but also unnerving. If this thoroughly human woman could do what she did even in the midst of internal turmoil, what’s my excuse?

I have none, of course.

I'm a freelance writer and communications consultant based in New Hampshire. I blog about my Catholic faith, New Hampshire pro-life issues, and hiking in the Granite State.