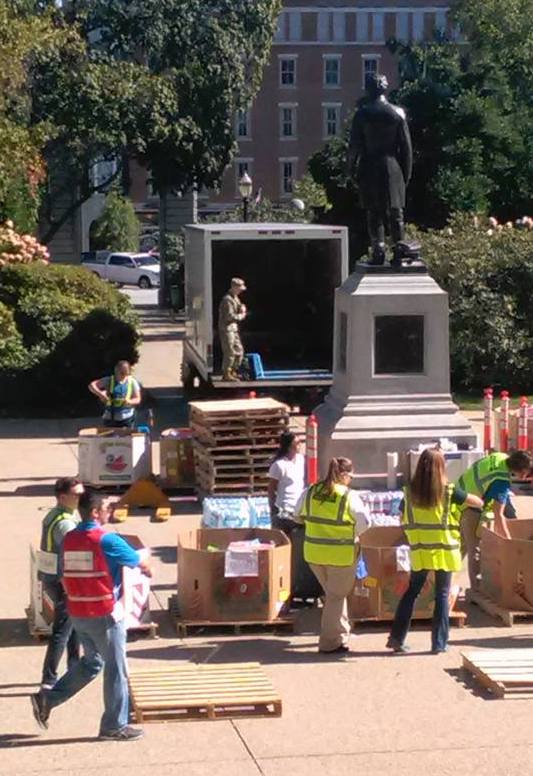 The grind-it-out side of public policy occupied me this morning, as I went to the State House to listen to a subcommittee patiently work out the language of a bill. That done, I walked outside to see what was up on the State House plaza.

And my day was made.

A collection was underway for the Red Cross, with an eye to the disaster in Puerto Rico. Pallet upon pallet of water awaited loading onto trucks. Other types of donations were being sorted, labeled, and packaged. One large “check” was on display, indicating a substantial cash donation by one of the state’s larger utilities. Kids coming off school buses for their State House tour carried armloads of things to donate to the effort.

State employees, elected officials, just plain folks, those wonderful fourth-graders: everyone on the plaza was on the same page. This was a relief effort in every sense.

The Governor was on the scene, delighting the schoolkids with a photo op, and someone said to him, “Will any of this actually get where it’s supposed to go?” He said reassuring things. I hope he’s right. Distribution: that’s the sticking point. How will this get to Puerto Rico? How will the Red Cross allocate things among the multiple disasters it’s addressing these days? I wish I knew the answers.

The people on the plaza weren’t being paralyzed by discouragement or uncertainty over what comes next. They were doing their best with what they had. They left me inspired, refreshed, challenged. That was a fine midday course correction.

I don’t know who came up with the notion of #GivingTuesday as a way to follow Cyber Monday and Black Friday and (remember this one?) Thanksgiving, but it’s a fine idea. For 2016, Giving Tuesday will fall on November 29.

Over at Leaven for the Loaf  last year, I offered some ideas for ways to give. I’ve edited that post to update the links to likely projects and organizations. I hope you’ll share your own ideas with me.

I’m told that #GivingTuesday is a kickoff to the charitable season. Thanks for the clear border, guys, but where I live – amid people of modest means whose time is the greatest gift they have to offer – giving isn’t a seasonal thing. Still, this recently-minted hashtagged holiday sparks a few ideas. Some involve money, others involve time, and each has special meaning for me. While many of these suggestions are New Hampshire-based, similar opportunities exist wherever you live.

(c) EllenKolb.com and Ellen Kolb, 2022. Excerpts and links may be used, provided that full and clear credit is given with appropriate and specific direction to the original content.