Unless my understanding is dim (always a possibility), every year is a Year of Mercy in the economy of salvation. Even so, I understand and rejoice in Pope Francis’s declaration of the Jubilee Year of Mercy now drawing to a close. I’ve enjoyed the little delights, the mini-pilgrimages, visiting different churches with Holy Doors. Each has been a place of prayer and peace.

I was privileged early in the year to travel to Venice, Italy, an unexpected blessing that materialized on very short notice. I was eager to visit Basilica San Marco, which I knew was a Holy Door pilgrimage site. As I approached the church, I noticed two doors in use: a large central door was for tourists, and a smaller door to the right for pilgrims.

Once inside, I was guided to the Baptistery, where at first I was too stunned by the grandeur to pray. I was much more tourist than pilgrim at first. Get a grip, I told myself more than once. Eventually, alone in the splendid room, I was able to pray – beginning with a quick thank You.

The very antiquity of my surroundings gave me pause. My diocesan cathedral was built about 120 years ago. That’s old, by local standards. The Baptistery in Basilica San Marco, on the other hand, is a 14th-century addition to an 11th-century church.

After a few minutes, the art and ornamentation became less distracting to me and more integrated into worship of Christ. My very solitude became a gift. I liked being alone in the silent Baptistery when I knew that guided tours were going on nearby in the main part of the basilica. It was the off-season for tourists, I guess, and that was my good fortune.

Eventually, the sense of being a tourist faded. I was in a place consecrated to God. The communion of saints became vivid to me as I knelt in a place where fellow Christians had knelt nearly a millenium before.The stories told in the mosaics were familiar and needed no translation. The Blessed Sacrament was the Real Presence. 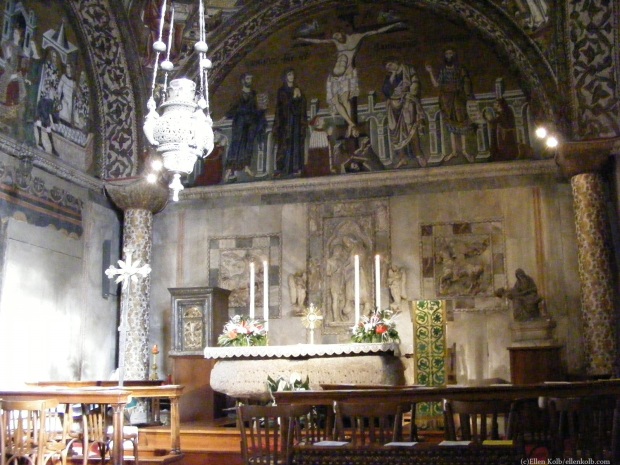 Making a Holy Year pilgrimage is as easy as going to one’s own diocesan cathedral or other designated spot. (In my own state, the Bishop has even blessed a Holy Door in the chapel at the men’s State Prison for the inmates there.) I didn’t need Europe for my Jubilee celebration. I got it nevertheless, through a set of circumstances I couldn’t have anticipated even six months in advance. Who knows why? Some blessings make no sense, and I’m left with nothing to do but whisper a prayer of gratitude.