Peter Ingemi, in his blogging persona as Da Tech Guy, is a Massachusetts-based writer and political reporter whose blog is a staple for conservatives in the region. The writers Ingemi welcomes on his blog (a group that includes me) all get fair warning before coming on board that the boss is unapologetically Catholic.

In his new book, Ingemi puts aside political reporting and takes up a labor of love: Hail Mary: the Perfect Protestant (and Catholic) Prayer [Imholt Press, 2017, 80 pages, $6.99 paperback, $2.99 Amazon Kindle e-book]. Ingemi is donating a portion of every sale to his local Catholic radio station in north central Massachusetts.

The book’s title is intriguing and perplexing at the same time. Ingemi is reaching for two audiences, and he’s likely to score with his fellow Catholics. Will the word “Protestant” in the title appeal to anyone? Among my own acquaintances are people who identify themselves as Baptist, Lutheran, or simply Christian – but Protestant, however accurate in a historical sense, is not a label they use. I wonder how many of Ingemi’s intended readers will get past his book’s title. 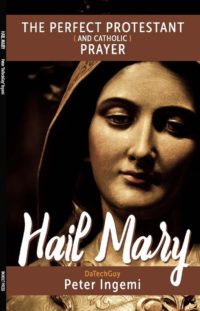 Those who do will find a brief (80 pages), straightforward examination and celebration of the Hail Mary prayer. Ingemi writes in the hope that all Christians, Catholic and non-Catholic alike, will come to value the prayer’s meaning.

Ingemi takes the reader through the Hail Mary clause by clause. In the early part of the prayer, the words are taken from Scripture, offering common ground for all of Ingemi’s intended readers.

The second part of the prayer, following the invocation of the name of Jesus, also gets a line-by-line breakdown that flows naturally from what has come before.

This book could be one resource for any Catholic’s personal education, because it illuminates a prayer so common to Catholics that it might be taken for granted. It also could equip Catholics to explain the Hail Mary to non-Catholic friends.

Ingemi’s enthusiasm is irreproachable. He is nevertheless frank about the fact that he has no credentials as a theologian. This is a personal labor of love, not a work of scholarship.

If there is ever a second edition, the book would benefit from tighter copyediting and a sharper focus on readers who profess faith in Christ yet don’t understand Catholicism or Marian prayer. The author assumes knowledge of some things which have yet to be proven or explained to non-Catholic readers.

As for his Catholic readers, they’d probably be pleased to see a future edition carry an imprimatur. I know from conversation with the author that he’d be pleased for his work to receive one.

At its best, Ingemi’s book reflects faith that is informed by hope and charity, not by fear. Peter Ingemi sees the Hail Mary as a unifier for Christians. He will make a reasonable case for that to anyone, whether Catholic or not, who approaches his book with curiosity and good will.

Note: I received and reviewed a courtesy copy of the book’s text in proof form. Some typos and grammar detracted from the book’s quality, but they may have been corrected in the final published version. This review contains an affiliate link.

This post is part of the #OpenBook linkup hosted at My Scribbler’s Heart and CatholicMom.com.